Query: A query is a request for data or information from a database table or combination of tables.

Select Query: Select query is used to retrieve data from a table by selecting fields. It is the mostly used SQL query.

Parameter Query: A parameter query is one of the simplest and most useful queries that is done by taking input as a parameter from a dialog box, which is then used by the query in an expression or criteria. It is used when you want to create a query that you can use many times, but with a different value each time.

Action Query: An action query is a query that makes changes to or moves many records in just one operation. There are four types of action queries: append, update, make-table, and delete.

QUEL: QUEL stands for Query Language. It is a data definition and data manipulation for INGRES. INGRES stands for Interactive Graphics and Retrieval System. INGRES is a relational database management system developed by Michael Stonebraker. QUEL does not support relational algebraic operations such as intersection, minus or union.It is based on tuple calculus and does not support nested sub queries.

QBE: Query by example is a query language used in relational databases that allows users to search for information in tables and fields by providing a simple user interface where the user will be able to input an example of the data that he or she wants to access. QBE was created by Moshe Zloof at IBM in the 1970s in parallel to SQL’s development. It is a graphical query language where users can input commands into a table like conditions and example elements. The principle of QBE is that it is merely an abstraction between the user and the real query that the database system will receive. In the background, the user’s query is transformed into a database manipulation language form such as SQL, and it is this SQL statement that will be executed in the background.

SQL: SQL stands for Structured Query Language. SQL is a standard language for accessing and manipulating databases. SQL was the first commercial language introduced for E.F Codd’s Relational model of database. Today almost all RDBMS(MySql, Oracle, Infomix, Sybase, MS Access) use SQL as the standard database query language. SQL is used to perform all types of data operations in RDBMS.  Although SQL is often described as, and to a great extent is, a declarative language (4GL). It also includes procedural elements. SQL consists of many types of statements, which may be informally classed as sub-languages, commonly:

Data Definition Language (DDL): This includes changes to the structure of the table like creation of table, altering table, deleting a table etc. All DDL commands are auto-committed. That means it saves all the changes permanently in the database.

Here are some commands that come under DDL:

CREATE- It is used to create a new table in the database. See the following syntax-

ALTER- It is used to alter the structure of the database. This change could be either to modify the characteristics of an existing attribute or probably to add a new attribute. See the following syntax-

DROP- It is used to delete both the structure and record stored in the table. See the following syntax-

TRUNCATE- It is used to delete all the rows from the table and free the space containing the table. See the following syntax-

RENAME- It is used to rename a table.

Here are some commands that come under DML:

INSERT – It is used to insert data into the row of a table. See the following syntax-

UPDATE- This command is used to update or modify the value of a column in the table. See the following syntax-

DELETE- It is used to remove one or more row from a table. See the following syntax-

DELETE FROM table_name [WHERE condition];

Transaction Control Language(TCL): These commands are to keep a check on other commands and their affect on the database. TCL commands can only use with DML commands like INSERT, DELETE and UPDATE only. These operations are automatically committed in the database that’s why they cannot be used while creating tables or dropping them.

Here are some commands that come under TCL:

COMMIT- It is used to save all the transactions to the database.

ROLLBACK- Rollback command is used to undo transactions that have not already been saved to the database.

SAVEPOINT- It is used to roll the transaction back to a certain point without rolling back the entire transaction.

Data Control Language (DCL): Data control language are the commands to grant and take back authority from any database user.

Here are some commands that come under DCL:

GRANT- It is used to give user access privileges to a database.

REVOKE- It is used to take back permissions from the user.

SELECT- It is used to select the attribute based on the condition described by WHERE clause.

SELECT column_name–/* FROM table_name WHERE conditions;

Database Operators: An operator is a reserved word or a character used primarily in an SQL statement’s WHERE clause to perform operation(s), such as comparisons and arithmetic operations. Different types of operators-

Arithmetic Operators- You use the arithmetic operators to calculate a value from two or more numbers or to change the sign of a number from positive to negative or vice versa. 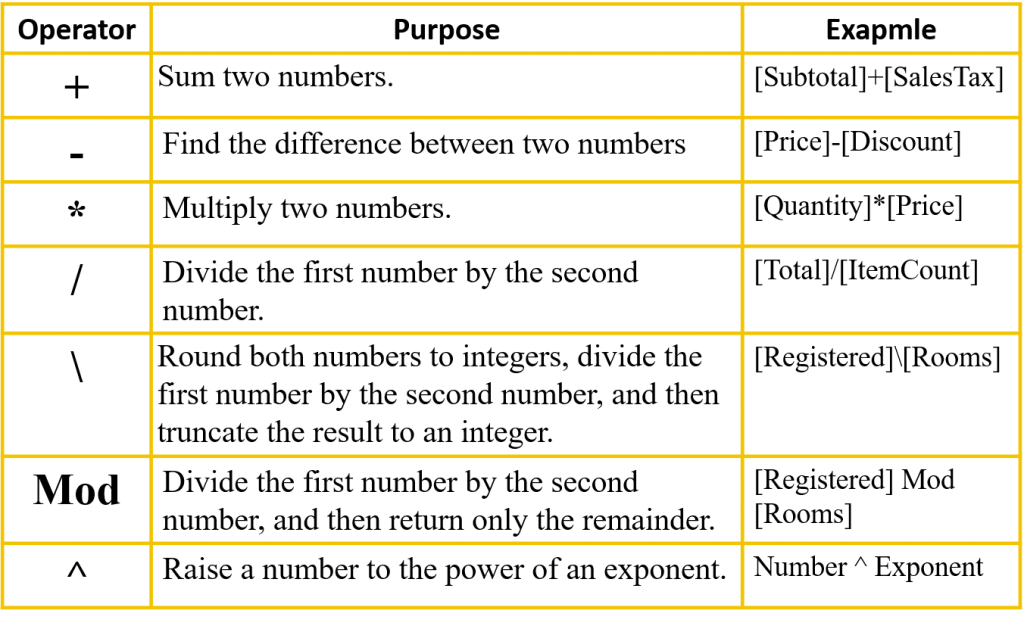 Comparison Operators- You use the comparison operators to compare values and return a result that is True, False, or Null. 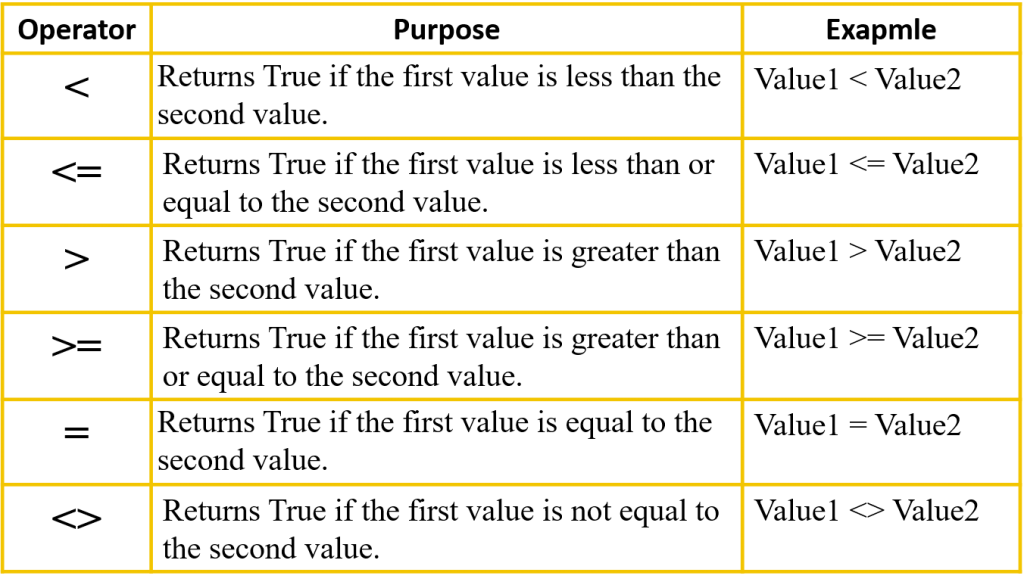 Logical Operators- You use the logical operators to combine two Boolean values and return a true, false, or null result. Logical operators are also referred to as Boolean operators. 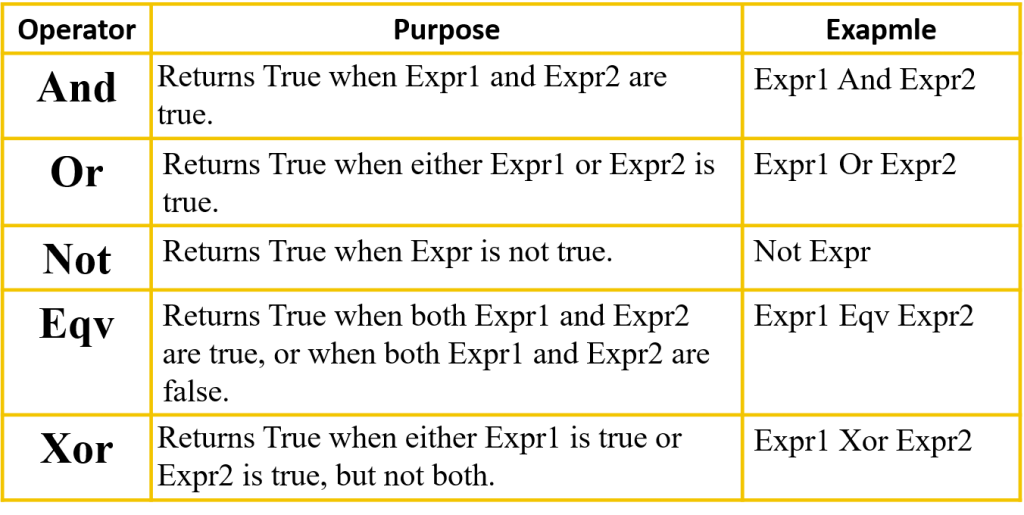 Concatenation Operators- You use the concatenation operators to combine two text values into one. 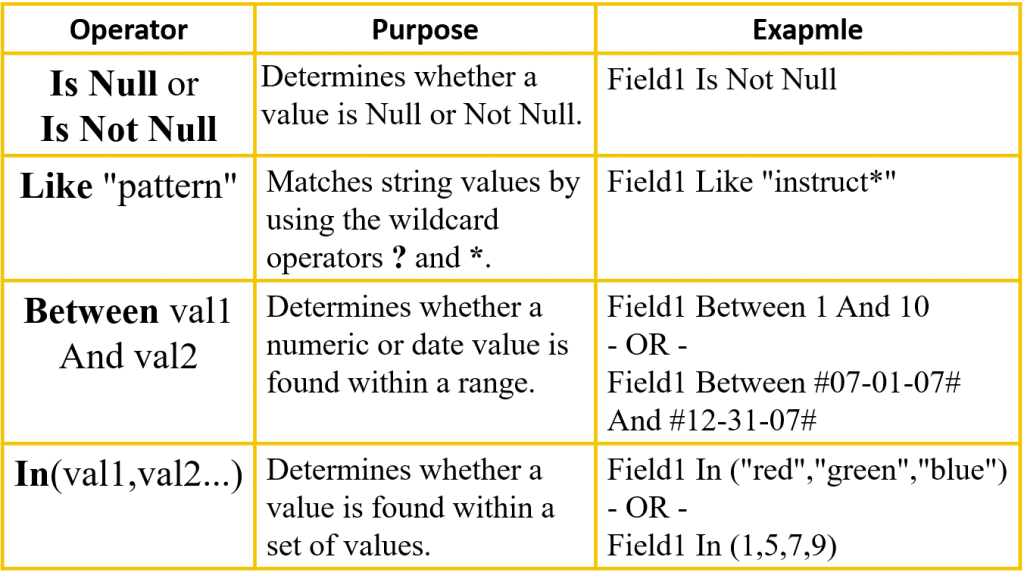