Basic concept of ‘C’ programming language: ‘C’ is a general-purpose, structured or procedure, high-level language that was originally developed by Dennis M. Ritchie to develop the UNIX operating system at Bell Labs. It is also popular as mid level language. C was originally first implemented on the DEC PDP-11 computer in 1972. C is a successor of B language which was introduced around the early 1970s and B is successor of BCPL(BCPL-Basic Combined Programming Language) developed by Martins Richards.

‘C’ is called structured programming language. Because in ‘C’ program is divided into various small parts or modules which are known as function, method, routine, subroutine, etc.. Each module can be written separately and together it forms a single ‘C’ program. This structure makes it easy for testing, maintaining and debugging processes.

C is considered as a middle-level language:

C is considered as a general purpose language:

The programming languages which can fulfill the needs of a wide variety of domains are called as general purpose programming languages. C is considered as a general purpose language because this language can fulfill more than one purpose, for example they can be apt for mathematical calculations, research work and application development at the same time.

Basic Structure of a ‘C’ program: 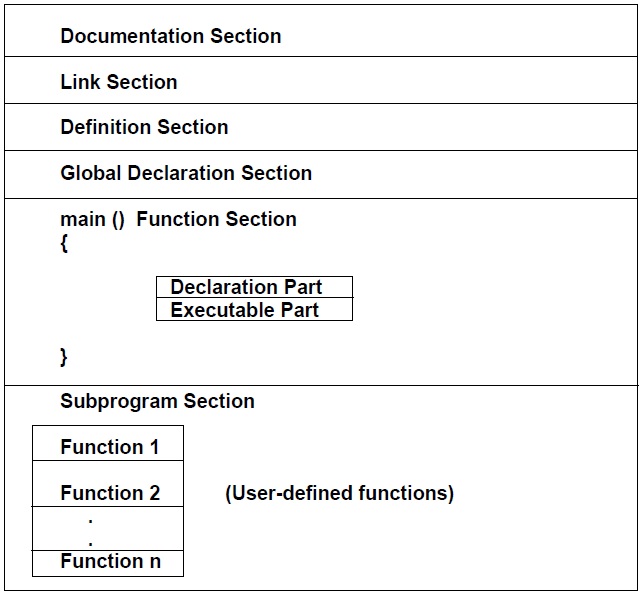 Documentation Section: This is an optional section. This section consists of comment lines which include the name of programmer, the author and other details like time and date of writing the program. Documentation section helps anyone to get an overview of the program. Comments can be written in two ways-

Link Section: This section is mandatory for a program. The link section consists of the header files of the functions that are used in the program. It provides instructions to the compiler to link functions from the system library. Format of adding header file is-

Global Declaration Section: The global variables that can be used anywhere in the program are declared in global declaration section. This section also declares the user defined functions.

Explanation of different parts of a ‘C’ program:

1. #include<stdio.h> is used for using printf() and scanf() library functions in the execution section of the program.

2. #include<conio.h>  is used for using getch( ) library functions in the execution section of the program.

3. It is necessary have one main() function in every C program.

4. ‘{‘  indicates starts of the execution of program.

5. Three integer type variable for example x, y and sum have been declared.

9. getch() library function has been used to hold the output in the console until user exit.

a. What is header file?