Data Type: A data type specifies the type of data that a variable can store such as integer, floating, character, etc. Each data type requires different amounts of memory and has some specific operations which can be performed over it.

There are the following data types in C language: 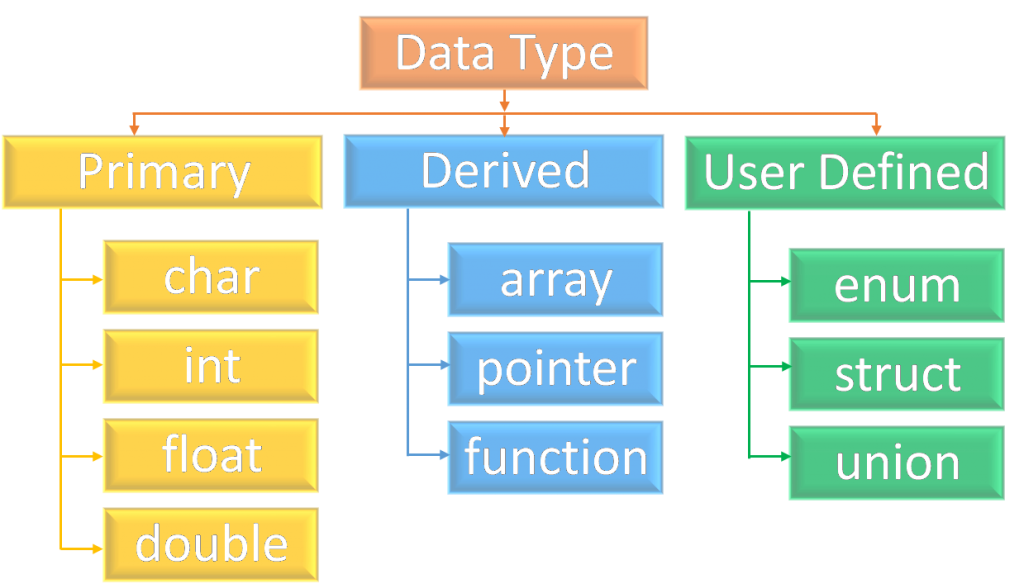 ‘void’ data type: ‘void’ type means no value. This is usually used to specify the type of functions which returns nothing.

Below the list of ranges along with the memory requirement and format specifiers of different data types on 32 bit gcc compiler:

Token: Each and every smallest individual units in a C program that are meaningful to the compiler are known as C tokens. Or We can say C tokens are the basic buildings blocks in C language which are constructed together to write a C program. Tokens can be classified as follows:

Keywords: Keywords are pre-defined or reserved words in a programming language. Each keyword is meant to perform a specific function in a program. Since keywords are referred names for compiler, they can’t be used as variable name. Keywords are written in lowercase letters. C language supports 32 keywords which are given below:

Identifiers:  Each element in a C program is given a name called identifiers.They are used to identify a particular element or used for naming of variables, functions, array etc. in a program. Identifiers are the user-defined names consisting of ‘C’ standard character set. Each identifier of a program must have a unique name.

Following rules must be followed for naming identifiers:

Variable: In C language, when we want to use some data value in our program, we can store it in a memory space and name the memory space so that it becomes easier to access it.The naming of an address is known as variable. Variable is the name of memory location. Unlike constant, variables are changeable, we can change value of a variable during execution of a program. A single variable can be used at multiple locations in a program. A variable name must be meaningful. A variable must be declared first before it is used somewhere inside the program. Variable names are just the symbolic representation of a memory location. A variable name is written following the rules for naming identifiers. Format for declaring a variable is given bellow:

Constants: A constant is a value or an identifier whose value cannot be altered in a program. Constants are also like normal variables. But, only difference is, their values can not be modified by the program once they are defined. They are also called as literals.

Constant in C language can be declared in two ways:

Strings: A string is an array of characters ended with a null character(\0). This null character indicates that string has ended. Strings are always enclosed with double quotes(“ “).

Let us see how to declare String in C language−

Special symbols: The following special symbols are used in C having some special meaning and thus, cannot be used for some other purpose.[] () {}, ; * = #

Operators: Operators will be discussed in the next lesson.