Operator: An operator is a symbol that tells the compiler to perform specific mathematical or logical operations.  In other words we can say that an operator operates the operands.The data items on which operators act upon are called operands.Operators are used in programs to manipulate constant and operands.

Depending on the number of operands that an operator can act upon, operators can be classified as follows:

Unary Operators:Those operators that require only single operand to act upon are known as unary operators.For Example increment(++) and decrement(–) operators.

C operators can be classified into following types based on operations:

Logical operators: Logical Operators are used to combine two or more conditions/constraints or to complement the evaluation of the original condition in consideration. The result of the operation of a logical operator is a boolean value either true or false.

pre-increment (++ variable): In pre-increment first increment the value of variable and then used inside the expression (initialize into another variable).

Pre-decrement (– variable): In pre-decrement first decrement the value of variable and then used inside the expression (initialize into another variable). 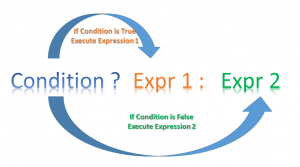 Expression: Operators, functions, constants and variables are combined together to form expressions. Consider the expression A + B * 5. where, +, * are operators, A, B  are variables, 5 is constant and A + B * 5 is an expression.

Mathematical expressions are written in c program in the following way:

Operator precedence and associativity in expression: