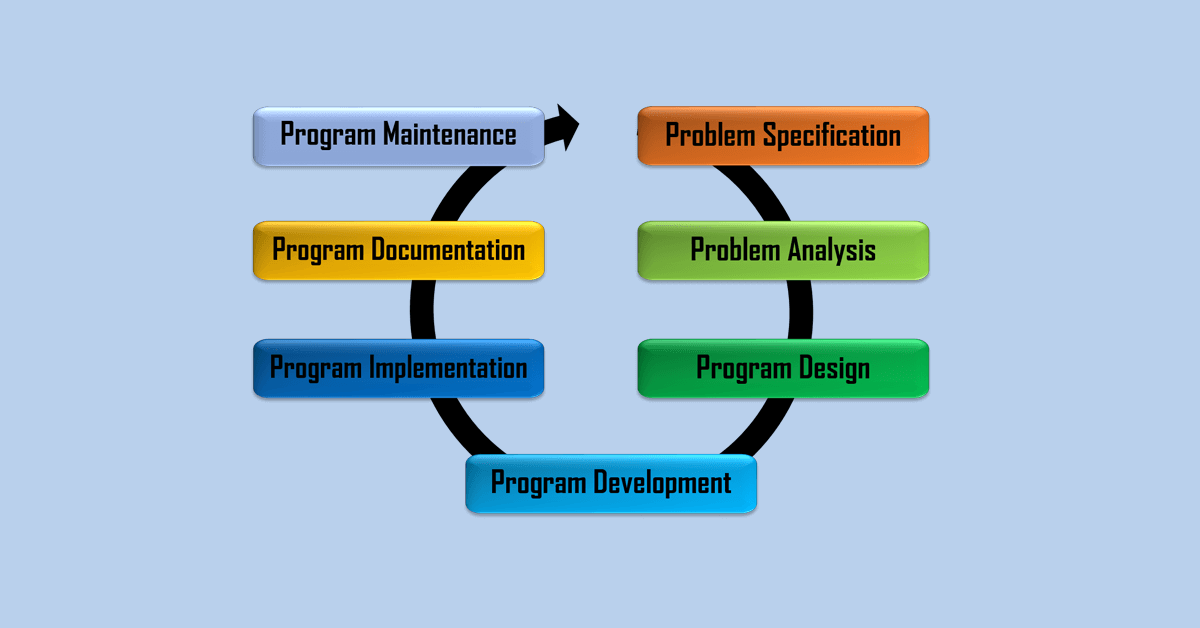 1. You will be able to explain the organization of program.

2. You will be able to describe the characteristics of a standard program.

3. You will be able to explain the steps of developing a program.

Every complete program has three essential parts which make a program standard through interaction with each other parts. These parts are-

Input: Every program should have input system to process.

Process: Every program should have processing system taking inputs from the user.

Output: Every program should have output system to show the result after processing.

A standard program must have the following characteristics:

1. Program should be easy and understandable so that another programmer can update the program later.

2. Time and memory complexity have to be efficient to run the program.

3. Program has to be upgradeable.

4. Debugging and Testing should be easier.

5. Program has to be maintainable easily.

Steps or process of developing a Program:

1. The facts and figures which are necessary for developing the program.

2. The way in which the program will be designed

3. Also, the language in which the program will be most suitable.

4. What is the desired output and in which form it is needed, etc

3. Relation between input and output

In this case, C, C++, java, python etc are used as high-level language.

Program testing and program debugging are performed in this step.

Testing: The process of checking error/s in a program after completing the program is called program testing.  Testing is done so that the program runs or functions according to the end user’s requirement. In this case, Outputs of the program are checked for different inputs. If output is not expected then there is error in the program.The errors in a program are-

Syntax Errors: Syntax errors are like “spelling and grammar” errors in program. It is called compile time errors. Any violation of rules of the programming language results in syntax errors. This type of error can be resolved easily because the translator program can detect such errors. If syntax errors are present in the program then the compilation of the program fails and is terminated after showing the list of errors and the line number where the errors have occurred. Correction of one or two errors in the program may remove the entire list of errors.

For example- not using semicolon(;) at the end of statement, using print() instead of using printf() etc.

Run-time Errors: Run-time errors are the errors that occur during the execution of the program. Some examples are, dividing by zero error, insufficient memory for dynamic memory allocation, referencing an out-of-range array element. These are not detected by compiler while compilation process. A program with these kinds of errors will run but may cause termination of program. Detection and removal of a run-time error is a difficult task. Logical error is one kind of run-time error because this type of error can not be detected by the compiler (debugging).

Debugging: Error of a program is called Bug. Debugging is a process of detecting, locating and correcting the bugs in a program. It is performed by running the program again and again. Debugging tools (called debuggers) are used to identify program errors at various development stages.

Syntax error can be resolved in debugging but it is very difficult or almost impossible to resolve Logical Error and Run-time Error.

In 1945, a moth entered into the Mark-1 computer and made its home, causing the computer to become inoperable. Since then, the word bug in computer science means error.

These are some of the advantages of providing program documentation −

1. Keeps track of all parts of a program

3. Programmers other than the developer can understand all aspects of program

4. Improves overall quality of the program

Program maintenance is the process of modifying a program after delivery to achieve any of these outcomes,

a) What is testing?

a) What is debugging?

a) What is syntax error?

a) What is logical error?

a) What is rum-time error?

b) Algorithm or flowchart is related in which step of program development? Explain.

b) Debugging or Testing is related in which step of program development? Explain.

c) The solution process of ICT teacher mentioned in the stem is related to which step of program development? Explain.

d) “The activity of Rokon mentioned in the stem is an important step in developing a program” -Analyze.

1. Which is the previous step of program coding?

2. For what kind of error in the program computer gives message?

3. What is called the method of fixing the error in the program and correcting it?

4. It requires for programming –

5. The work involved in program design is-