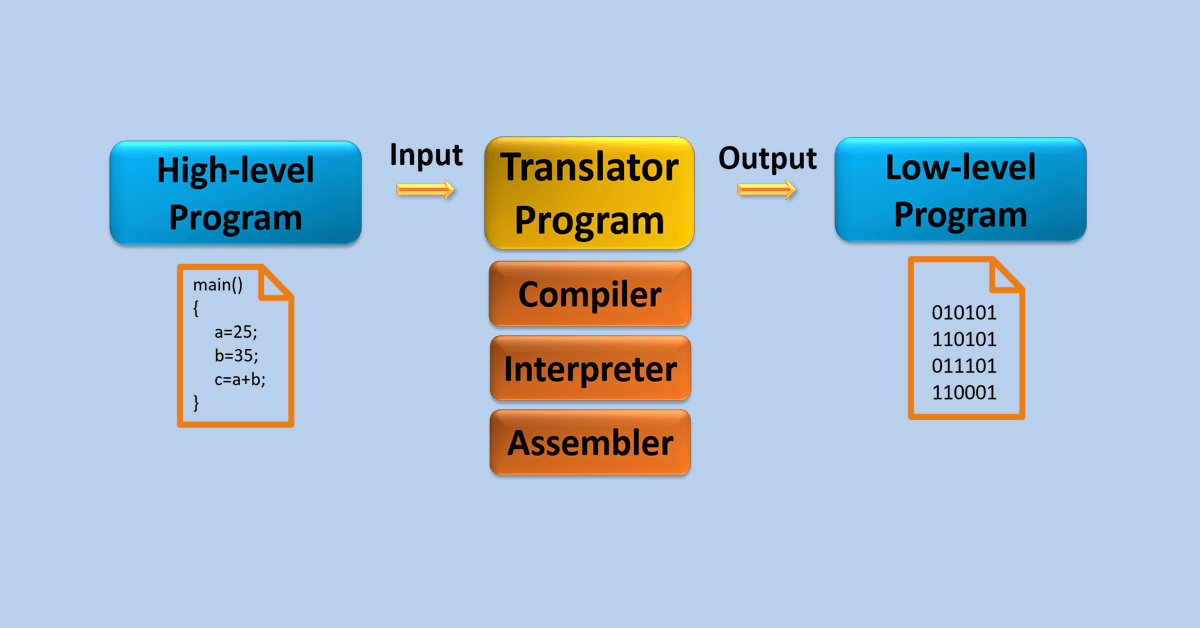 1. You will be able to explain translator program.

2. You will be able to describe compiler and it’s function, advantages and disadvantages.

3. You will be able to describe interpreter and it’s function, advantages and disadvantages.

4. You will be able to differentiate interpreter over compiler.

5. You will be able to describe Assembler and it’s functions.

The program that converts source program into object program is called translator program.

A translator program takes in source program as input and converts it into object program as output. It also detects and reports the error during translation by providing diagnostic messages wherever the programmer violates syntax of the high-level language.

The different types of translator are as follows:

A compiler is a type of translator program that Scans the entire program written in a high-level language and translates it as a whole into machine code.. That is, the source program into an object program.

The compiler completes the task of translation in two steps –

The second step is to execute the object program to display the results on the basis of input data.

Functions of the Compiler:

1. Link with the corresponding sub-routine.

3. If there is any syntax error in the program, make a list of errors during translation.

4. Identify the range of main memory.

A compiler is likely to perform many or all of the following operations: pre-processing, lexical analysis, parsing, semantic analysis, conversion of input programs to an intermediate representation, code optimization and code generation.

1. The compiler translates the entire program together, the overall execution time is comparatively faster.

2. The program converted through the compiler is completely converted into machine language.

3. Generates output program which can be run independently from the original program.

4. Once the program is compiled, it is no longer needed to compile.

1. The compiler displays all the errors of the program at once, so it takes more time to correct the program.

2. Program debugging and testing is slower.

3. As the compiler is a large program, it requires more space in memory to store.

An interpreter, like a compiler, is a kind of translator program that reads one line of a program written in a high-level language and converts it into mechanical language and executes it, displaying instant results.

Interpreter translates line by line and reports the error once it encountered during the translation process. It directly executes the operations specified in the source program when the input is given by the user. It gives better error diagnostics than a compiler. 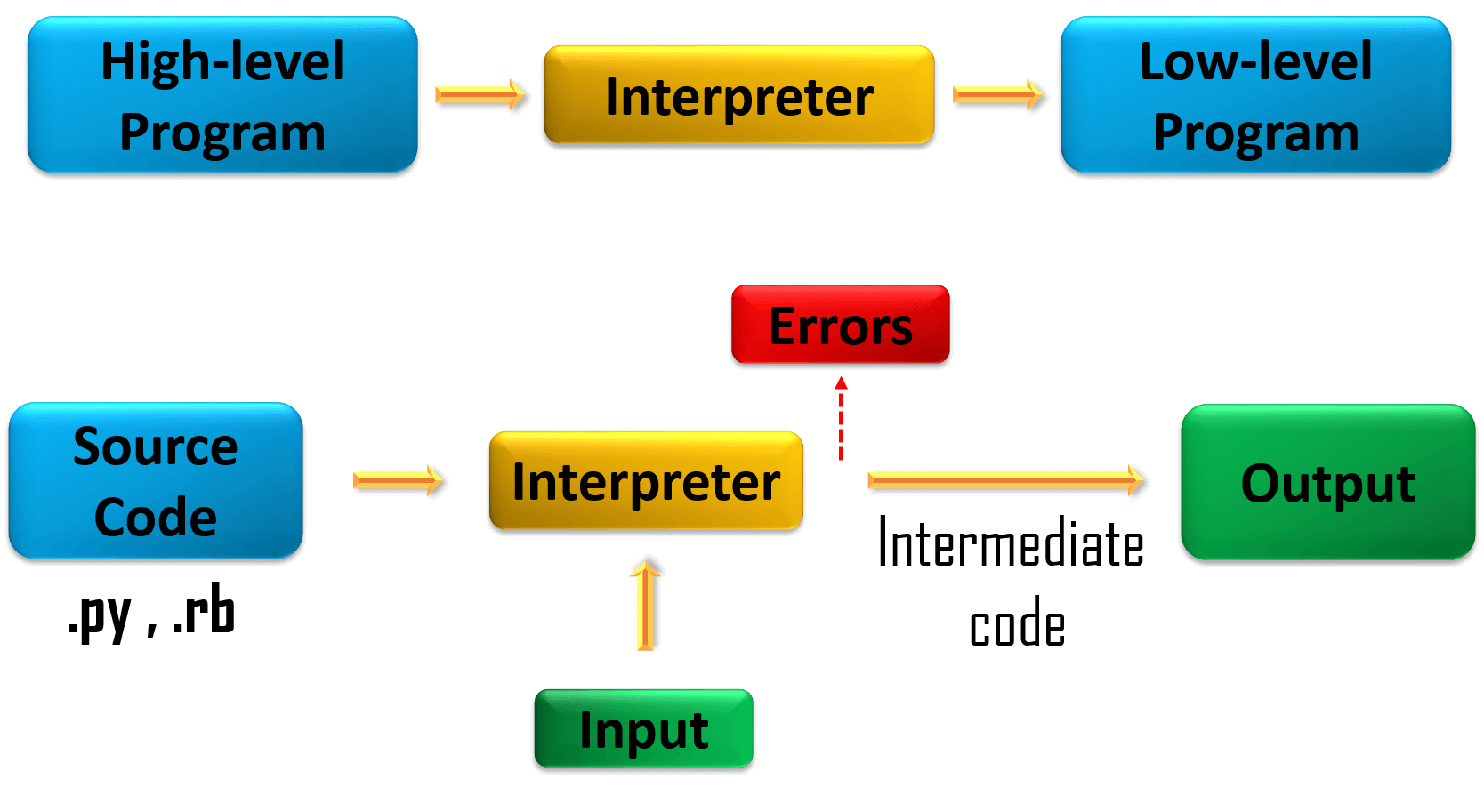 Functions of the Interpreter:

1. Link with the corresponding sub-routine.

3. If there is any syntax error in the program, make a list of errors during translation.

4. Identify the range of main memory.

1. The biggest advantage of the interpreter is that it is user friendly.

2. It is easy to use to correct and change program errors.

3. The smaller the interpreter, the less space it takes up in memory.

4. It is commonly used in small computers.

1. Since the interpreter translates the program line-by-line, it takes more time than the compiler to translate.

2. Programs converted through interpreters are not completely converted into machine or object programs.

3. Translation is required every time the program is executed.

4. Do not generate output program. So they evaluate the source program at every time during execution.

Assembler is a translator program which is used to translate the assembly language code into machine language code. 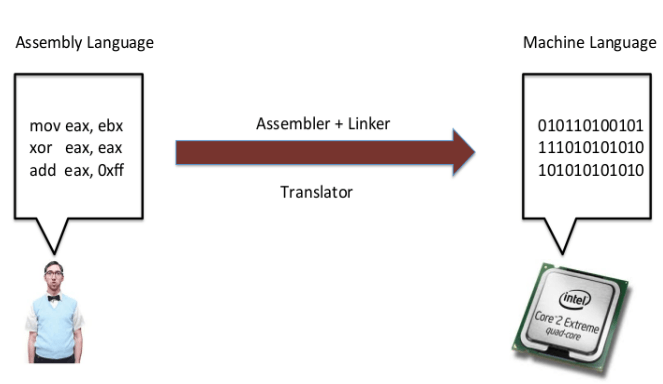 3. Keep all instructions and data in main memory.

4. If there is any error in program, notify with error message.

The difference between an interpreter and a compiler is given below:

a) What is translator program?

a) What is assembler?

a) What is compiler?

a) What is interpreter?

a) What is source code or program?

a) What is object code or program?

b) ‘As a translator program compiler is more suitable’-explain.

b) ‘It needs to compile the program each time of execution’-explain.

b) In which case interpreter is better than compiler? -explain.

b) Why source program is needed to translate? -explain.

Arafat and Nila are two programmers. Arafat writes programs with the help of various mnemonics. On the other hand,  Nila’s written program is closer to human language to see. Programs written by two of them can solve the same problem.

c) Explain the translator program used to translate the program written by Arafat.

d) Which translator program is more convenient for converting the Nila’s written program into an object program? Analyze.

d) Which of the following is quicker in executing the programs of Rahim and Karim mentioned in the stem? Give analytical feedback.

1. How many types of translator software?

2. What is called a program written in high level language?

3. The advantage of compiler is-

i. Translates the entire program at once

ii. Debugging and testing in the program is faster

ii. If there is error displays it on the monitor

4. Which translator program is used for C programming language?

5. Differences between a compiler and an interpreter are-

i. In case of program translation

iii. In case of error display