1. You will be able to explain the concept of virtual reality.

2. You will be able to describe the elements for creating a VR system.

3. You will be able to describe the application areas of VR.

4. You will be able to analyze the positive and negative impacts of  VR.

In other words, A believable, interactive 3D computer-created world that you can explore so you feel you really are there, both mentally and physically.

Unlike traditional user interfaces, VR places the user inside an experience. Instead of viewing a screen in front of them, users are immersed and able to interact with 3D worlds. By simulating as many senses as possible, such as vision, hearing, touch, even smell, the computer is transformed into a gatekeeper to this artificial world.

Some Characteristics of VR:

Virtual Reality uses a variety of information exchanger equipment to make it feel real. As-

In VR, you see a 3D image that changes smoothly, in real-time, as you move your head. That’s made possible by wearing a head-mounted display, which looks like a giant motorbike helmet or welding visor, but consists of two small screens (one in front of each eye), a blackout blindfold that blocks out all other light (eliminating distractions from the real world), and stereo headphones. The two screens display slightly different, stereoscopic images, creating a realistic 3D perspective of the virtual world. HMDs usually also have built-in accelerometers or position sensors so they can detect exactly how your head and body are moving (both position and orientation—which way they’re tilting or pointing) and adjust the picture accordingly.

An alternative to putting on an HMD is to sit or stand inside a room onto whose walls changing images are projected from outside. As you move in the room, the images change accordingly. Flight simulators use this technique, often with images of landscapes, cities, and airport approaches projected onto large screens positioned just outside a mockup of a cockpit.

It gives people the ability to handle virtual objects has always been a big part of VR. Usually, this is done using data gloves, which are ordinary gloves with sensors wired to the outside to detect hand and figure motions.

Even simpler than a data glove, a wand is a stick you can use to touch, point to, or otherwise interact with a virtual world. It has position or motion sensors (such as accelerometers) built in, along with mouse-like buttons or scroll wheels. 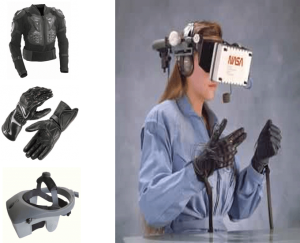 The Elements for establishing a  VR System:

Effectors: The effector is a special type of interface device that connects to the virtual reality environment. Such as head mounted display, data glove, full body suit etc.

Reality Simulator: It is a type of hardware that provides information to the effector .For example, different types of sensors.

Application: Different simulation softwares. For example, the “Division” of the Autodesk.

Geometry: Geometry is information about the external properties of different objects in the virtual environment.

Engineering & Science: Scientific and engineering data visualization has benefited for years from Virtual Reality, although recent innovation in display technology has generated interest in everything from molecular visualization to architecture to weather models.

In researching complex topic of science, analyzing the result of research work and presenting the result. In using of scientific tools and in the simulation of industrial process VR is widely used.

Sports & Entertainment: With the welfare of VR it is possible to play a game and practicing of a game with the computer system.

Trade & Commerce: Using VR  the buyer or consumer can verify the product quality and information about the harmful aspects of using that product. Product performance and efficiency can be determined and justified also.

Education: Virtual Reality cab be used in taking and providing education. To present the complex topic and making easier to understand. 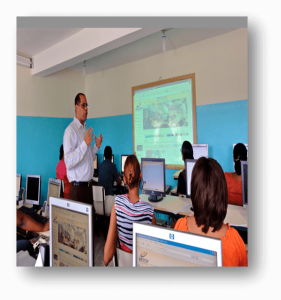 Medical: Health service is one of the largest fields for using VR. Surgeons can train with virtual tools and patients, and transfer their virtual skills into the operating room, and studies have already begun to show that such training leads to faster doctors who make fewer mistakes. With this technology simulation of complex surgery  can be done extreme perfectly. To achieve the idea of a new treatment or professional training virtual reality is widely used.

Driving Training: Using VR one can take training of car driving easily. One can get ideas about different driving tools. As a result trainee can learn driving easily.

Army Training: Using VR solder can learn how to use weapons. They can also practise and prepare for war.

Protection of History & Tradition: To protect history and tradition, VR is being used in museum so that audience get real feelings of different events.

Impact of VR in everyday life:

Some Positive impacts of VR:

Some Negative impacts of VR:

a. What is virtual reality?

b. “It is possible to touch imagination staying in reality”-Explain.

b. Explain the necessity of VR in training.

b. How VR is helpful for us? explain.

b. Explain the impact of VR in everyday life.

According to the stem answer the following questions:

Sejan came to Dhaka on a study tour and visited the Bangabandhu Navotheater. There he saw the views of the solar system in an artificial environment. Sejan felt the thrill of being a space traveler. Later, Sejan shared his experiences with his friends and they formed a club called ‘Practice of Space Knowledge’.

c) Which technology has been used in the stem? Explain.

d) Analyze the effects of the technology used to in the stem.

According to the stem answer the following questions:

Rima went to the Novotheater with her father. There he enjoyed the feeling of space travel. His father told him that it was done with the help of a special technology, that would help in the development of our education.

c) Explain the technology described in the stem.

d) Analyze the role of the technology mentioned in the stem.

1. Which type of images are presented in virtual reality?

2. What is called the environment that is not real but seems to real?

3. The equipments used in VR for data exchanging are –

5. The things used in creating VR are-