1. You will be able to describe wireless communication system.

2. You will be able to explain the importance of wireless communication system.

3. You will be able to explain Bluetooth technology.

4. You will be able to explain Wi-Fi technology.

5. You will be able to explain WiMAX technology.

Wireless Communication System where transmitting information from one point to other, without using any any physical medium.

Some of the important Wireless Communication Systems available today are:

Wireless Communication systems can be again classified as Simplex, Half Duplex and Full Duplex.

Advantages of a Wireless Communication System:

Disadvantages of a Wireless Communication System:

The best example is Bluetooth and Wi-Fi (WLAN). Both these technologies use the 2.4GHz frequency for communication and when both of these devices are active at the same time, there is a chance of interference.

A hotspot is a physical location where people may obtain Internet access, typically using Wi-Fi technology, via a wireless local-area network (WLAN) using a router connected to an Internet service provider.

Bluetooth is a wireless technology that allows you to create a Wireless Personal Area Network (WPAN). Its coverage area is usually 10 to 100 meters. Currently almost all electronic devices have Bluetooth built-in. However, Bluetooth connection can also be provided through USB port on different devices. In 1994, telecom vendor Ericsson invented Bluetooth. The technology is named after the tenth-century King Harald Bluetooth of Denmark, Bluetooth. 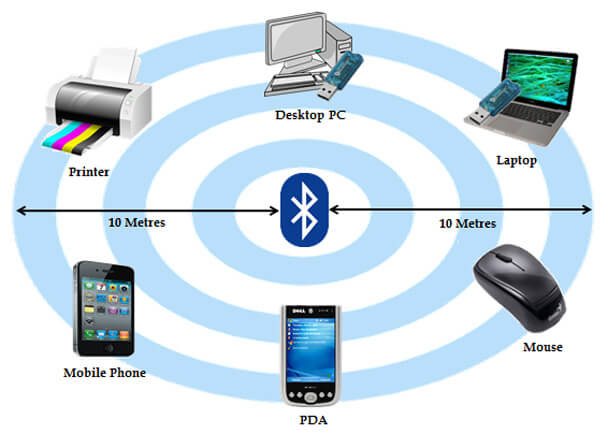 2. Bluetooth uses a radio web with a frequency of 2.4 GHz (GHz) to transfer data between two devices over short distances.

3. Its data transmission rate is about 1Mbps or more.

4. Bluetooth can exchange signals with a maximum of 8 devices under one piconet. One of them works as a master device and the rest as a slave device. Scatter nets can be formed again by combining many piconets.

When more than two Bluetooth devices communicate with one another, this is called a PICONET. A Piconet can contain up to seven slaves clustered around a single master. The device that initializes establishment of the Piconet becomes the master. Each device can communicate simultaneously with up to seven other devices within a single Piconet.

The term Wi-Fi is an acronym for Wireless Fidelity. Wi-Fi is a wireless technology that allows you to create a wireless local area network (WLAN). Its coverage area can be a room, a building or a distance of 32 meters in case of indoor and 95 meters in case of outdoor. Wi-Fi enabled devices such as a personal computer, video game console, smartphone or digital audio player can be connected to the Internet through a wireless network access point. 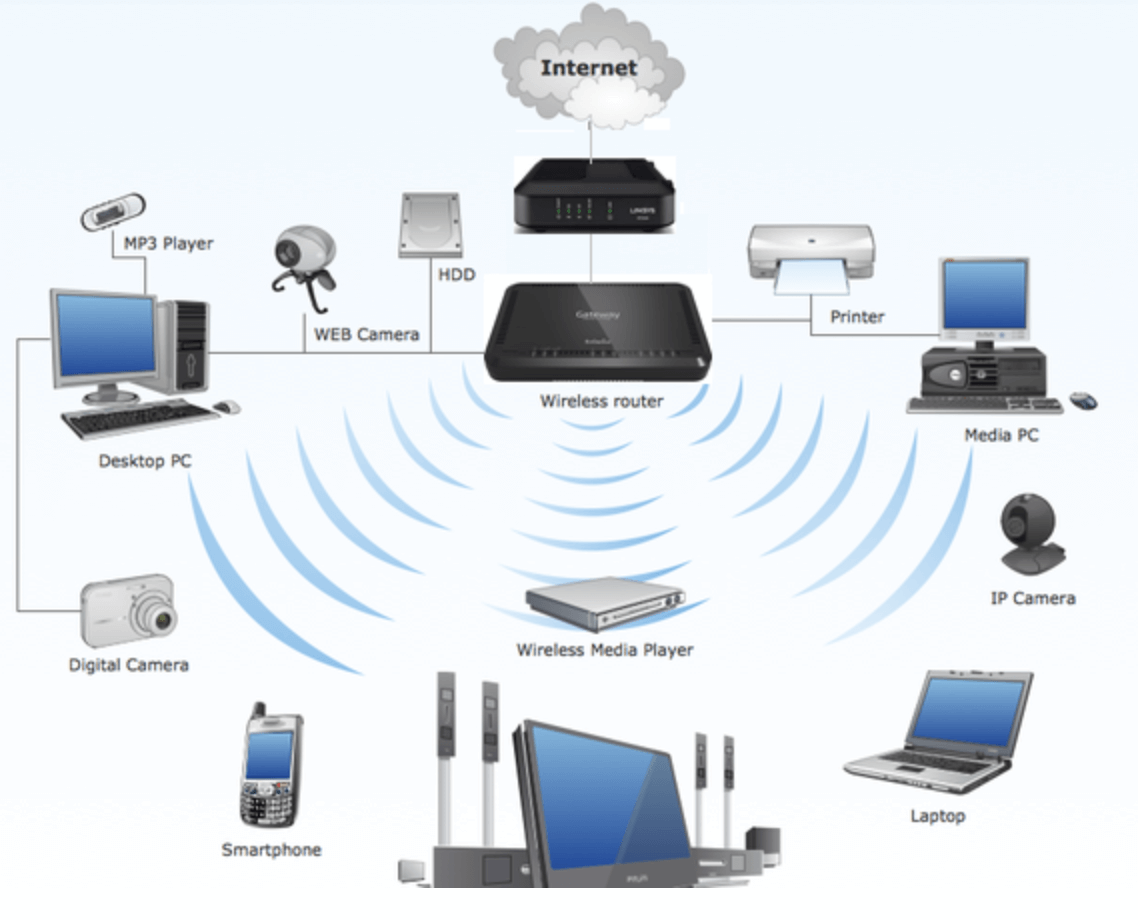 The full form of WiMAX is Worldwide Interoperability for Microwave Access. WiMAX is a wireless technology that allows you to create a wireless metropolitan area network (WMAN). WiMAX technology provides high-speed broadband services, wireless access to the Internet over a wide area. 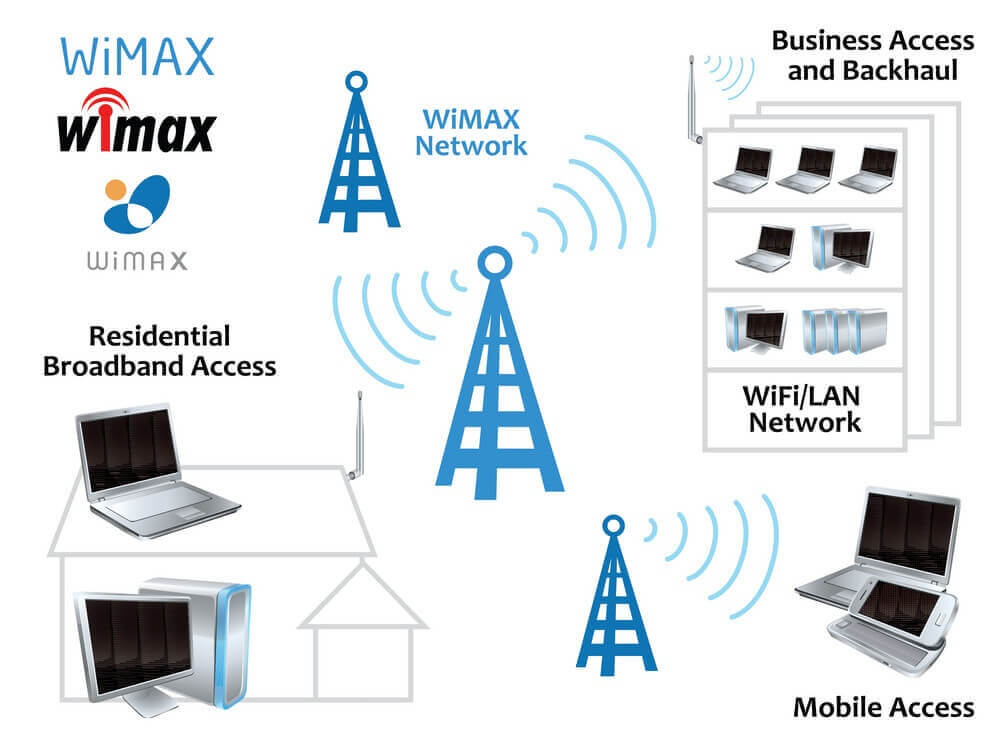 WiMAX has two main parts. One is the base station of WiMAX which consists of indoor and outdoor towers. The other is a WiMAX receiver with an antenna, which is connected to a computer or laptop. A WiMAX base station usually offers broadband internet access from 10km to 60km.

a) What is hotspot?

a) What is Bluetooth?

a) What is WiMAX?

b) “It is possible to transfer data over short distances at no cost” – Explain.

b) “Bluetooth technology is suitable for WPAN network”- Explain.

b) How to provide data security in Wi-Fi zone? Explain.

b) “Wi-Fi technology is suitable for WLAN network”- Explain.

b) Write the differences between Wi-Fi and WiMAX.

b) “WiMAX technology is suitable for WMAN network” – Explain.

b) Explain in which case it is reasonable to use WiMAX instead of Wi-Fi.

Mohan, a member of Sabuj Bangla Club, transferred some pictures of the environmental disaster captured on the camera of his mobile phone to his laptop through a special protocol of IEEE 802.15 standard. Mohan later sent the pictures to other members of the club using SHARE it.

c) Explain the type of protocol used for transferring images from the laptop mentioned in the stem.

d) Compare WiMAX with the hotspots used to send pictures to other members of the club.

Mr. Rahim bought a toy for his six-year-old son. He showed the flight of the aircraft using the remote. Her eldest son, on the other hand, uses the internet via cable with a laptop. Mr. Rahim uses wireless internet with the help of router on his smartphone.

d) Analyze the strategic approach of Mr. Rahim and his eldest son in internet usage.

1. What is the IEEE standard of WiMAX?

2. WiMax is used to create what type of network?

3. The network created with Bluetooth is called-

5. The difference between Wi-Fi and WiMax is-

i. In the coverage area