1. You will be able to explain Biometrics.

2. You will be able to describe the elements for implementing biometrics system.

3. You will be able to explain biometrics mechanism.

4. You will be able to explain the structural and behavioral characteristics of human which are used in biometrics system.

5. You will be able to describe application areas of biometrics technology.

Bio means ‘Life’ and Metric means ‘measure’. Biometrics technology measures and analyses biological data. Biometrics is such a technology that is used to identify individuals uniquely based on physiological and behavioral characteristics.

In other words, biometric system is a technology which takes an individual’s physiological, behavioral, or both traits as input, analyzes it, and identifies the individual as a genuine or malicious user.

Biometrics is used for authenticating and authorizing a person. Though these terms are often coupled; they mean different.

Each human being is unique in terms of characteristics, which make him or her different from all others. These  characteristics make a person stand separate from the rest.

Biological data or attributes used in biometrics are two types:

Basic Components of a Biometric System:

In general, a biometric system can be divided into four basic components. Let us see them briefly −

It is the sensing component of a biometrics system that converts human biological data into digital form.

The processing component is a microprocessor, Digital Signal Processor (DSP), or computer that processes the data captured from the sensors.

The database stores the enrolled sample, which is recalled to perform a match at the time of authentication.

The output interface communicates the decision of the biometric system to enable the access to the user. It could also be TCP/IP protocol, Radio Frequency Identification (RFID), Bluetooth, or one of the many cellular protocols. 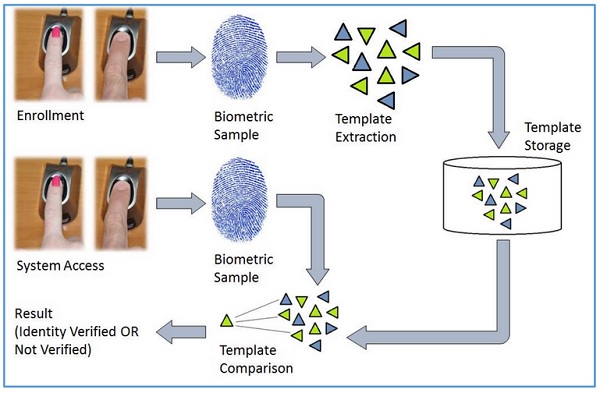 Types of Biometric System depending on human trait:

It is the most known and used biometrics solution to authenticate people on biometric systems. The reasons for it being so popular are there are ten available sources of biometric and ease of acquisition. Fingerprint is one of oldest and most popular recognition technique

Every person has a unique fingerprint which is composed of ridges, grooves, and direction of the lines. There are three basic patterns of ridges namely, arch, loop, and whorl. The uniqueness of fingerprint is determined by these features as well as minutiae features such as bifurcation and spots (ridge endings).

Finger print reader uses a light-sensitive microchip to produce a digital image. The computer analyzes the image automatically, selecting just the fingerprint, and then uses sophisticated pattern-matching software to match.

Finger print reader is a biometric device that take an image as input and compare with the image stored in database before. 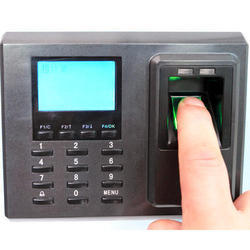 It includes measuring length and width of palm, surface area, length and position of fingers, and overall bone structure of the hand. A person’s hand is unique and can be used to identify a person from others. 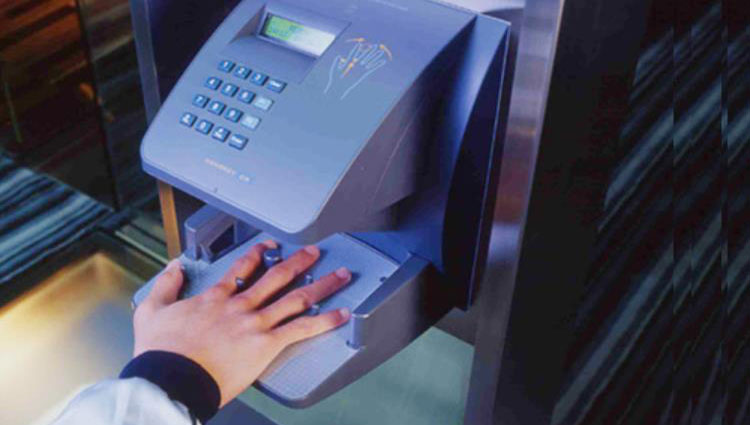 Hand geometry readers measure a user’s hand along many dimensions and compare those measurements to measurements stored in a file.

Facial recognition is based on determining shape and size of jaw, chin, shape and location of the eyes, eyebrows, nose, lips, and cheekbones.

2D facial scanners start reading face geometry and recording it on the grid. The facial geometry is transferred to the database in terms of points. The comparison algorithms perform face matching and come up with the results.

Iris recognition works on the basis of iris pattern in human eye. The iris is the pigmented elastic tissue that has adjustable circular opening in center. It controls the diameter of pupil. In adult humans, the texture of iris is stable throughout their lives. The iris patterns of left and right eyes are different. The iris patterns and colors change from person to person. 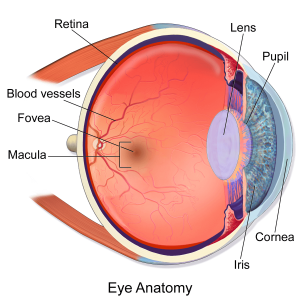 It involves taking the picture of iris with a capable camera, storing it, and comparing the same with the candidate eyes using mathematical algorithms. 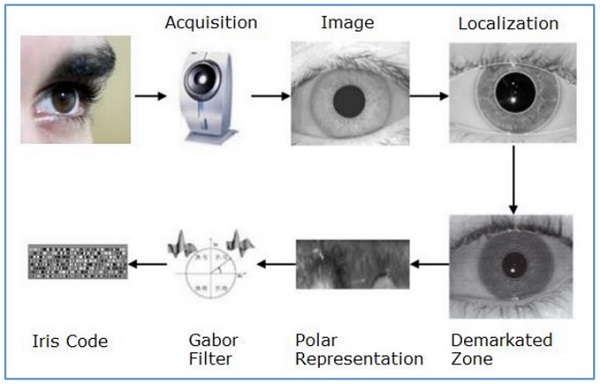 Retina is the lining layer at the back of the eyeball that covers 65% of the eyeball’s inner surface. It contains photosensitive cells. Each person’s retina is unique due to the complex network of blood vessels that supply blood.

In retinal scanning process, a person is asked to remove lenses or eyeglasses. A low-intensity infrared light beam is casted into a person’s eye for 10 to 15 seconds. This infrared light is absorbed by the blood vessels forming a pattern of blood vessels during the scan. This pattern is then digitized and stored in the database.

It is a reliable biometric as the retina pattern remains unchanged throughout the person’s life, barring the patterns of persons having diabetes, glaucoma, or some degenerative disorders.

Deoxyribo Neuclic Acid (DNA) is the genetic material found in humans. Every human barring identical twins, is uniquely identifiable by the traits found in their DNA, which is located in the nucleus of the cell.

DNA can be collected from any number of sources: blood, hair, finger nails, mouth swabs, blood stains, saliva, straws, and any number of other sources that has been attached to the body at some time.

Within cells, DNA is organized in long double helix structure called chromosomes. There are 23 pairs of chromosomes in humans. Out of the 46 total chromosomes, the offspring inherits 23 chromosomes from each biological parent. 99.7% of an offspring’s DNA is shared with their parents. The remaining 0.3% DNA contains repetitive coding unique to an individual.

The fundamental steps of DNA profiling are −

The more detailed the sample is, the more precise the comparison and in turn the identification of the individual is.

DNA Biometrics differs from all others in the following ways −

Voice and speech recognition are two separate biometric modalities that, because they are dependent on the human voice, see a considerable amount of synergy.

Both are contactless, software based technologies, and as such are counted among the most convenient biometrics in regular use.

Voice recognition, also commonly referred to a voiceprint, is the identification and authentication arm of the vocal modalities.

By measuring the sounds a user makes while speaking, voice recognition software can measure the unique biological factors that, combined, produce her voice.

Voiceprints can be measured passively as a user speaks naturally in conversation, or actively, if she is made to speak a passphrase.

The behavioral patterns include the changes in the timing of writing, pauses, pressure, direction of strokes, and speed during the course of signing. It could be easy to duplicate the graphical appearance of the signature but it is not easy to imitate the signature with the same behavior the person shows while signing.

This technology consists of a pen and a specialized writing tablet, both connected to a computer for template comparison and verification. A high quality tablet can capture the behavioral traits such as speed, pressure, and timing while signing.

During enrollment phase, the candidate must sign on the writing tablet multiple times for data acquisition. The signature recognition algorithms then extracts the unique features such as timing, pressure, speed, direction of strokes, important points on the path of signature, and the size of signature. The algorithm assigns different values of weights to those points.

At the time of identification, the candidate enters the live sample of the signature, which is compared with the signatures in the database.

This biometric analyzes candidate’s typing pattern, the rhythm, and the speed of typing on a keyboard. The dwell time and flight time measurements are used in keystroke recognition.

Dwell time − It is the duration of time for which a key is pressed.

Flight time − It is the time elapsed between releasing a key and pressing the following key.

The candidates differ in the way they type on the keyboard as the time they take to find the right key, the flight time, and the dwelling time. Their speed and rhythm of typing also varies according to their level of comfort with the keyboard. Keystroke recognition system monitors the keyboard inputs thousands of times per second in a single attempt to identify users based on their habits of typing.

a. What is biometrics?

b. Explain the technology used for identifying an individual.

b. “Biometrics is a behavior’s properties dependent technology”- Explain.

b. What are the advantages and disadvantages of using biometrics technology?

b. “Using biometrics system is convenient for office security”- Explain.

According to the stem answer the following Questions:

The identity of many garment workers who were killed in the destruction of Rana Plaza in Savar was not initially identified. Later, with the intention of the government, high technology made it possible to identify most bodies.

c) Identify and explain the procedure adopted for the identification of the bodies of the workers described in the stem.

According to the stem answer the following Questions:

Rafiq has brought his business company under the control of computer technology. The main gate of his organization is opened when an employee place finger on a machine. On the other hand, employees have to wait a bit in front of a machine when they enter their rooms.

c) Discuss the process of entering into the main gate of the company.

d) Which one is more convenient between two techniques used in main gate and employees own room? Analyze.

1. In Biometrics system Fingerprint is-

2. What is called the technology that identify an individual based on structural characteristics?

3. Which one is used in Biometrics?

4. The behavioral characteristics of Biometrics are-

5. The structural characteristics of Biometrics are-