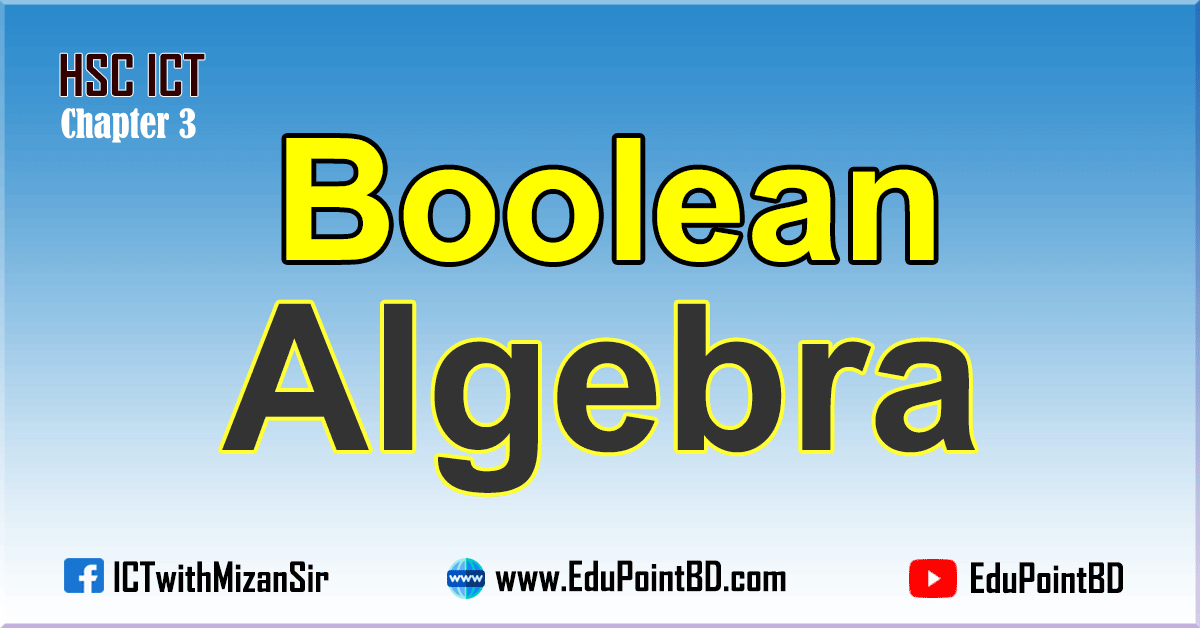 Boolean Algebra is an algebra, which deals with binary numbers & binary variables. Boolean Algebra is used to analyze and simplify the digital (logic) circuits. It is also called as Binary Algebra or logical Algebra or Switching algebra. A mathematician, named George Boole discovered a relation between mathematics and logic, based on this relation he developed a kind of algebra  in 1854 called Boolean algebra.

It is possible to solve all the mathematical and logical problems in digital devices by converting logic TRUE and logic FALSE of Boolean algebra into 1 and 0 respectively. 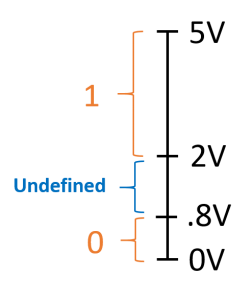 The following elements are in Boolean algebra-

In Boolean algebra whose values will remain unchanged is called Boolean Constant.  For example, Y = A + 0 + 1, Here, 0 and 1 are Boolean constant.

Boolean Postulates of OR:

The rules followed by OR Operation ( Logical addition) in Boolean Algebra is called Boolean Postulates of OR. The rule is – If any value among values is 1, result will be 1, Otherwise result will be 0.

Boolean Postulates of AND:

The rules followed by AND Operation (Logical Multiplication) in Boolean Algebra is called Boolean Postulates of AND. The rule is – If any value among values is 0, result will be 0, Otherwise result will be 1.

Boolean Postulates of NOT:

The rules followed by NOT Operation ( Logical Inversion) in Boolean Algebra is called Boolean Postulates of NOT. Complement of 1 is 0 and Complement of 0 is 1.

This theorem states that the dual of the Boolean function is obtained by interchanging the logical AND operator with logical OR operator and zeros with ones. For every Boolean function, there will be a corresponding Dual function.

Let us make the Boolean equations relations that we discussed in the section of Boolean postulates and basic laws into two groups. The following table shows these two groups.

Identity law – in this law variable remain unchanged it is ORed with ‘0’ or ANDed with ‘1’, i.e.,

Idempotent law – a variable remain unchanged when it is ORed or ANDed with itself, i.e.,

Double negation law – a variable with two negation its symbol gets cancelled out and original variable is obtained, i.e.,

Commutative law – a variable order does not matter in this law, i.e.,

Associative law – the order of operation does not matter if the priority of variables are same like ‘*’ and ‘/’, i.e.,

Distributive law – this law governs opening up of brackets, i.e.,

Proof of Some Basic Boolean Theorems:

In case of Boolean Addition: 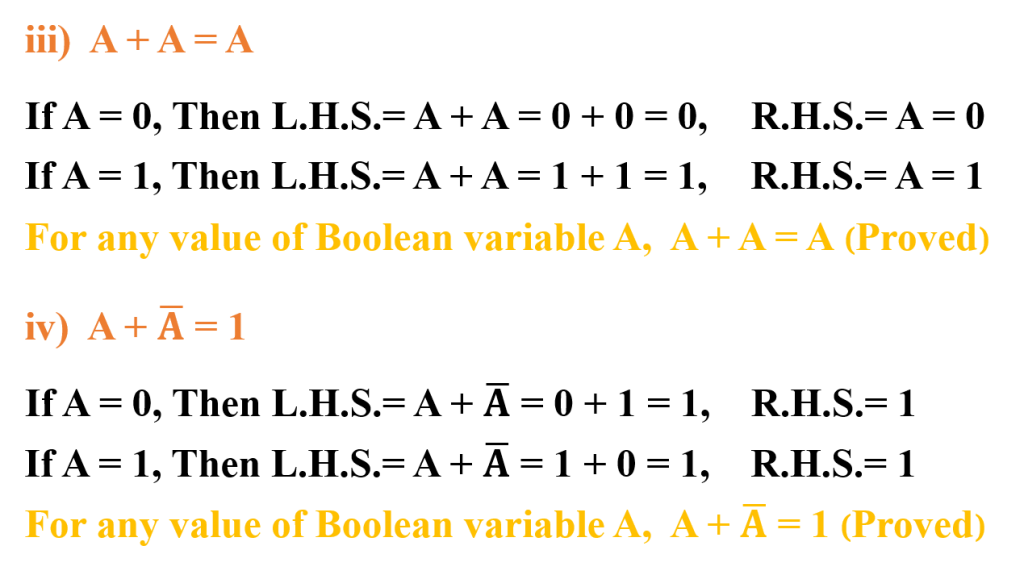 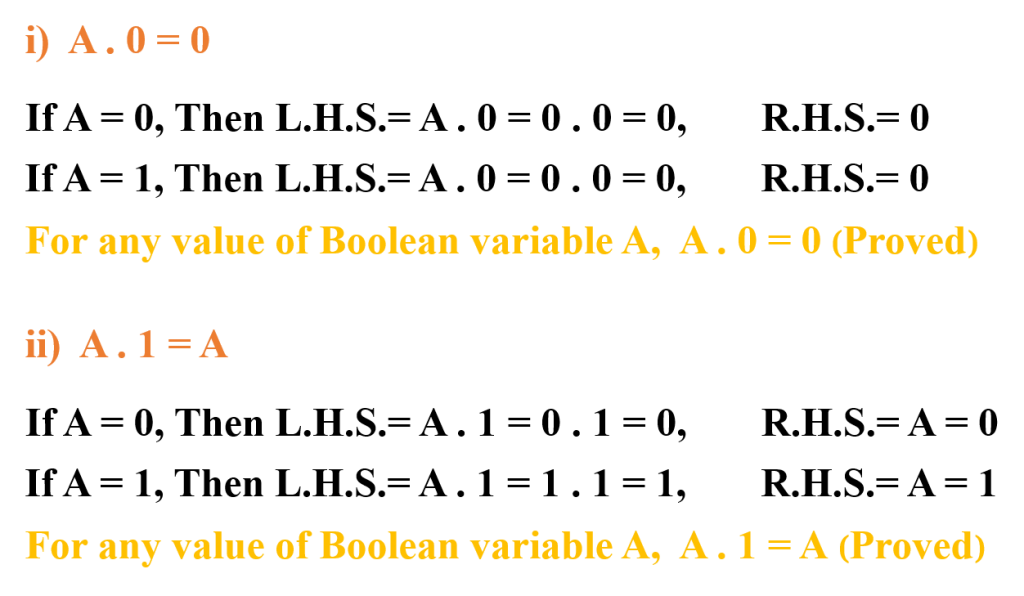 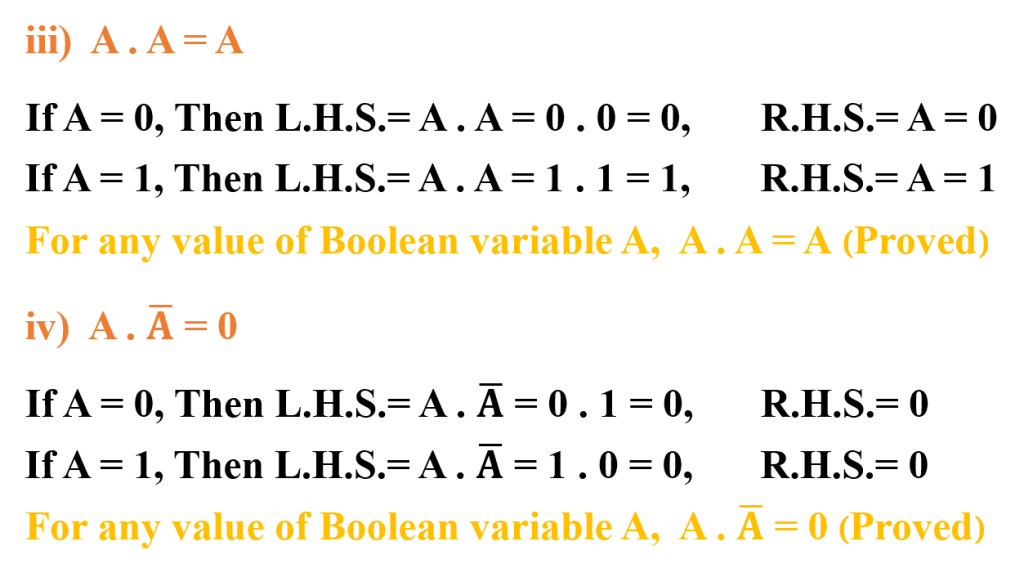 a. What is Boolean algebra?

a. What is Boolean variable?

a. What is Boolean constant?

a. What is Boolean complement?

a. What is a Boolean postulate?

a. What is Boolean duality principle?

b. “Binary addition and Boolean addition are not same”-Explain.

1. Who is the inventor of Boolean algebra?

2. In which year did George Bool find the relation between mathematics and logic?

3. Boolean algebra is based on which of the following relationships?

7. In digital system which voltage level is not defined?